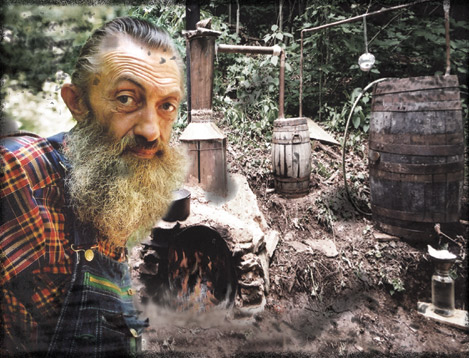 To quote Mr Seth Romatelli of the consistently listenable Uhhyeahdude:

You got that Sethro. Moonshiners, like Good Hair and The Wild and Wonderful Whites of West Virginia is quintessential America. Basically another Discovery Channel documentary series that distinguishes itself from the field through the way it allows its subjects to speak. Moonshining, the illegal production of distilled alcohol is an American tradition as strongly associated with the Appalachians as crystal meth is these days. From the earliest colonies through to prohibition and the present, the image of the American moonshiner stands proud among a cast of cowboys, Indians, gangsters and other heroes of the New World. On Moonshiners we get access to this world in detail through the ABC (alcoholic beverage control a uniquely American institution) and the producers (said access is limited naturally by the ‘shiners themselves for legal reasons). We are introduced to a world of risk, high danger and high rewards, shotguns and car chases, police raids, forest romps and bleary eyed recounts of history.

Like the fictional drama of the biker gang drama of Sons of Anarchy, Moonshiners presents a unique ambivalence at the heart of American society. On one hand is the spirit of creation, where strength and conviction are held in each hand and with perseverance come to forge new societies both within and outside of the dominant social, legal and political cultures. This harkens back to the earliest days of the New World’s switch from colony to independence. Meanwhile it also sheds light on the extent to which a country so apparently enamoured with freedom and opposed to over-regulation is in a state of total paradox and collapse. The poor Shiners, living in poor America live life at standards well below the imagined society seen on TV. Their poverty and education levels see them excluded from this fantasy world. Yet even as they struggle to determine the means of survival in their lives their communities are controlled by archaic religiously inspired taxation and prohibition laws.

But let me be clear, I do not justify or excuse the individuals and the communities they create in Moonshiners. Nor do I romanticise them. For me, these people fall into a similar conceptual framework as Housos. Living in the margins in a state of moral, legal and ethical complexity, pushed and pulled by poverty, violence, history and geography. Yet what I do respect is their conviction, strength and gall to forge ahead in a world where they no longer belong. A world of neuroses, of endlessly bifurcating virtualities and sensations. They do a lot with a little and while that lot may be questionable, they do it with focus passion and a connection to landscape. Shine on.